Published in the Cortland Standard newspaper on June 21, 2019.
By TRAVIS DUNN, Staff Reporter

The dead of winter is probably not the best time to consider replacing your home’s heating system, but sometimes you don’t have a choice, as the McClure family of Preble found last winter when the oil heater bit the dust.

“We were hoping it would last one more year, but it crapped out in December,” said Peter McClure.

The McClures needed a new heating system and fast. Halco Energy, a heating services company, installed one, saving thousands of dollars as part of a state energy efficiency program.

The programs are part of the HeatSmart CNY Program, a campaign to make homeowners aware of help available to upgrade or replace home heating systems.

To offset installation costs in Cortland, Cayuga, Oswego, Madison and Onondaga counties, the New York Energy Research and Development Authority recently increased the incentives available for air source heat pumps to $1,000 per ton for whole home systems; incentives for geothermal systems are offered at $1,500 per ton. Most homes require about three to five tons; tons represent an antiquated measurement for the amount of energy required to melt a ton of ice, said Lindsay Speer with the Alliance for a Green Economy, campaign manager for HeatSmart CNY.

HeatSmart also provides $2,000 in additional incentives for air source systems and $7,500 for geothermal systems in households that have incomes lower than 80 percent of the median area income of $52,451.

Preble doesn’t have gas lines in town, so McClure thought he’d likely buy a propane furnace, until Matt Dennis from Halco told him about a geothermal system, which transfers energy from the ground. McClure had heard of the system before, but he didn’t think he had enough land for the wells they require. But Dennis told him he did, and geothermal would be a lot cheaper in the long run.

“We were sold,” McClure said. “We felt that the advantages far outweighed the cost.”

That was how, in the coldest of days of winter, the McClures had five 150-foot-deep wells drilled on their property. Halco put in heat pumps, and, in a separate project, installed solar panels.

The McClures took advantage of the grant and incentive programs to finance the project.

The main incentive is the reduction in annual heating costs. One family in the town of Pompeii, for instance, was paying $2,500 a year in heating costs, but a geothermal system dropped that cost to $500, Speer said.

“We’re really trying to drive down the cost and make (the heating systems) accessible to people because the operating costs are so low,” Speer said.

The benefits of these new systems are not just financial, Speer said. The environment also benefits, because carbon emissions and electricity needs are reduced.

Three installer companies were chosen for the HeatSmart program: Snug Planet, Ground Up (a partnership between ACES Energy and Geotherm Inc.) and Halco. 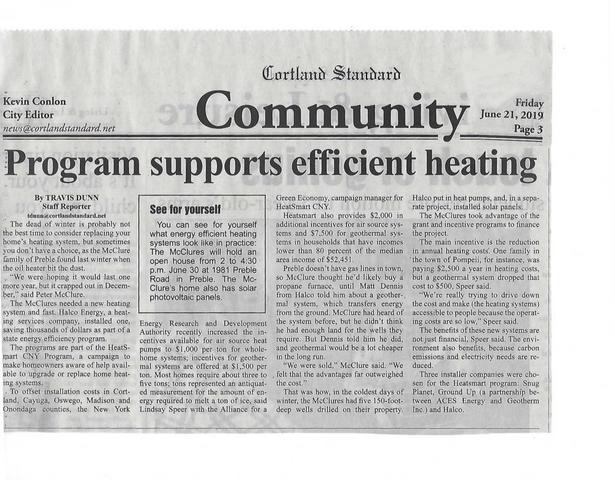