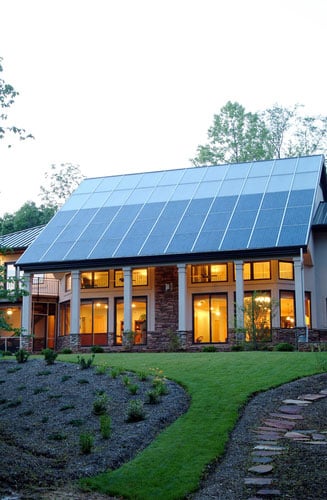 If you're driving around your neighborhood and spot a large area of sleek, bluish panels on the roof of a house, it's probably an array of solar electric panels, sometimes called PV or photovoltaic modules. These panels are being used to produce electricity to run home appliances and lighting (but not heating appliances).

How the system works

At the molecular level of heat transfer, solar electric collectors convert solar radiation directly into electricity. Solar radiation strikes a solar cell, usually made of a semi-conductor such as silicon, and causes it to release electrons. Because the voltage of a single solar cell is low, a large number of cells are connected together in series to form a module. The modules are wired together to form an array. The array may be mounted on the roof or on a rack built on the ground.

The electricity generated by a solar electric system may be used immediately, stored in batteries, or returned to the utility grid. In the latter case, homeowners receive credit for what is produced, thereby lowering their electric bill. In effect, the utility company serves as "storage" for electricity that's produced during periods of the day when you don't need it. It's also there as a backup for cloudy periods when you aren't producing much electricity.

Get A FREE Quote!

Nevertheless, thin-film modules and laminates account for a small fraction of total solar module sales, partly due to the fact that they require 2.5 to 4 times more roof space to produce the same kW-hr/yr output. The residential application that has drawn the greatest interest for thin film PV are standing seam metal roofs and as 'solar shingles.' Many people like the concept, even though they get less electricity from them than they would from an array of modular solar electric collectors of the same area.

Which systems offer the best payback or return on investment

Various Federal and state incentives may be available to homeowners wishing to install a solar system. You can find out what's available in your area by going to the Database of State Incentives for Renewables & Efficiency at www.dsireusa.org. In general, domestic hot water and swimming pool applications have the shortest paybacks and require the smallest investments. Solar electricity installations designed to satisfy a significant portion of your electrical needs may require much larger investments. Leasing programs, if available in your area, dramatically reduce the cost of installing a system.

With regard to space heating, passive solar house design is generally a more economical approach than active solar heating systems that require massive storage tanks or bins. Passive solar houses collect heat during the day and usually store it in masonry walls and floors from which it is released at night, when the temperature drops. Regardless of what type of solar system you're contemplating, begin conserving energy now. It costs a lot less to replace light bulbs with energy efficient ones and to insulate the attic and walls than it does to install a solar electric or solar heating system!

Contact Halco today for a home energy assesment to find out the best way for you to reduce your energy consumption and cost without sacrificing comfort. We offer our services in Ithaca, Rochester, Syracuse, Webster, Lansing, Fairport, Auburn, Cortland, Canandaigua, Pittsford, Newark, Oneida, Penn Yan, Canastota, Dansville, and more!